Hello readers! To wrap up this month's blog party, here's my House Special: Sherlock edition! I'll be taking ten characters from Sherlock and sorting them, even if I've done them on another Special. Remember to comment below. Also, at the end of this post you will see a list of everyone who participated in this month's party! 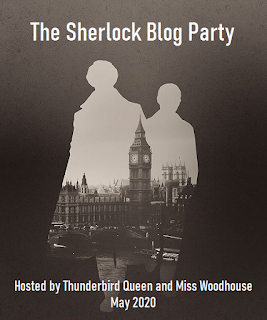 In February's House Special, I sorted Sherlock into Ravenclaw, though I was very split on the decision. Yet, I think I will stand by my choice this round. Ravenclaw is defined by their intellect, wisdom, and curiosity, all of which define Sherlock pretty well. He literally lives and breathes hundreds of kinds of information all at once, and reads all kinds of books and internet pages. However, he's also the type of person that will fail his basic classes because he found them to be too boring, or not bother to study at all. It's one extreme to the other with him.

John was actually the very first person to be featured back in my January House Special, and I put him into Gryffindor then as well. John is the very definition of having a lion's heart. He's been to hell and back, yet remains one of the most compassionate, loyal, and patient characters in the show. He kind of has to be, to live with Sherlock and be his best friend. To be all those things requires a raw amount of bravery, something John also has in abundance. I firmly believe he'd be worthy of lifting Thor's hammer.

Molly is the very definition of a textbook Hufflepuff. She's incredibly kind and sweet, willing to offer up a bit of humor or a shoulder to cry on, but will not hesitate to absolutely destroy you if you hurt someone close to her. She makes jokes about her job, won't hesitate to put Sherlock in his place, and break up with the world's leading psychopath. She's often a bright spot in Sherlock's usually morbid life, and follows her heart when it comes to love, as she realizes she can't, and won't, marry someone she doesn't truly love.

To start, I absolutely love Mary and her character as a whole, and I don't think the final season was at all kind to her, obviously. Mary is actually surprisingly clever, able to hide her past life from even Sherlock for a long time. She knows how to take on different identities, but wants out of her old life and into a more traditional one with a man she loves. Like a true Slytherin, she knows her worth as a woman, and knows exactly what her limits are and what she's capable of. It pains me that she never got to raise her daughter with John, or fully leave her past behind.

Admittedly, I don't think Lestrade ever got enough screen time, but, regardless, people seem to overlook that he practically runs Scotland Yard. He's like the equivalent of a police chief, but for all of London. His job is hard. And he has to put up with going to Sherlock constantly. However, he's a big enough man to admit when he's out of his depth, or desperate, and that's courage.

This landlady (not housekeeper) knows way more about you than you're probably comfortable with. Don't get me wrong, she's the sweetest woman with loads of kindness and compassion to give, but don't do the dishonor of underestimating her. This is the woman who was involved in a drug ring, and managed to force Sherlock Holmes into the trunk of her sports car to fix a relationship. Slytherins are capable of literally anything, and so is she.

This one seems pretty self- explanatory, though I want to make clear that not every villain that ever lived is in the house. In fact, in my first Special, I went out of my way to find a Hufflepuff villain. Regardless, the reason Moriarty goes into Slytherin and not Ravenclaw like Sherlock is because he actually has goals and ambitions that give him the extra edge over Sherlock. He built an entire criminal empire for himself, and decided to pick a fight with a man just as brilliant as him in order to prove who was superior. It's possible, that, if he hadn't gotten preoccupied with that, he could have toppled every world order and out himself right on top.

Eurus lands squarely in the house with her older brother. She is insanely clever and intelligent, and Mycroft put her as their generation's very own Einstein, though I highly doubt Einstein even thought of doing half the things Eurus ended up doing. But Eurus wants to know things. She likes conducting experiments to either figure out how something works or how to get a specific response, as with the entire plot of The Final Problem. Ravenclaws are known for wit and curiosity, both traits Eurus possesses in full.

I guess having a strange name automatically lands you a genius level IQ. What separates the oldest Holmes from his siblings is the simple fact that, well, he's a mature adult man. Yes, he may get into childish spats with Sherlock, but he actually has a real job and a real life. Which means he has goals, and can be very charming when need be to get his way, both Slytherin traits. He's also protective of his siblings, Sherlock mostly, and will actually throw the justice system out the window if it means keeping his little brother safe.

Again, little to no explanation is really required for this one. Simply put, Magnussen is a master manipulator, extremely cunning and clever, able to get what he wants when he wants it. He's probably the worst villain of the series, because, let's be honest, you don't flick John Watson in the face and expect to actually make it out of that situation alive.

I think that just about does it for our May blog party! Thank you everyone for participating and reading... it has been lots of fun. If you participated in the blog, but don't see your link below, comment and I will add it. Thanks again!