Did you grow up watching Buzz fly, or the Incredibles save the world? I certainly did. Pixar movies were a central part of my childhood, and I still love them to pieces this day. This is my second post for Movies Meet Their Match Pixar Blogathon, and I will be listing my favorite moments from all 22 films. If you haven't seen some of these, I will issue a SPOILER warning. 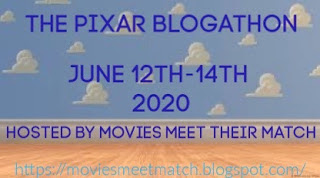 Figuring out how a world runs by scaring kids is creative enough, but actually figuring out how that system works behind the scenes is definitely going the extra mile. The scene  features all the inner workings of the door factory, like the roller coaster rails and Mike and Sully jumping from door to door in a hilarious montage. The colors and thrill of the whole scene are so fun and creative that I just had to add it. I've always wanted to ride those doors, even if it meant clinging on for dear life a hundred feet in the air. 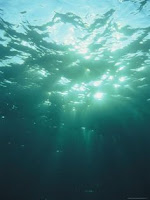 Dory's three famous words are what inspired an entire school of panicked fish to escape their deaths at the hand of fisherman. This is a truly inspiring and telling moment for every character, especially Marlin, who has to come to turns with letting his son go. I absolutely love the triumph of this moment, and rounds out the movie as a whole really well. What's not to like about one hundred or more fish chanting "Keep swimming! Keep swimming!"? Sounds like ideal life advice to me. 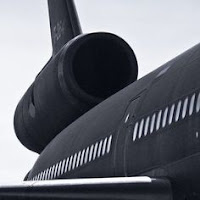 Cars 2 may not be the most popular of Pixar films, but, let me tell you, when I first saw this in theaters, I was completely floored (see what I did there?) by the opening minutes of the movie, which features a daring escape from British spy Finn McMissile, in true cars fashion. If the soundtrack alone isn't enough to get you completely hyped, the high speed action should. I feel like it sort of plays out like a James Bond film, which is probably the point, and it's awesome. I'm a sucker for shoot- 'em- up action scenes.

I just want to say that I can't believe this movie is thirteen years old. Yikes. Anyway, the struggle of the entire movie is about Remy that rat trying to balance two worlds, his family and his love for cooking. At the end, when all the kitchen staff have abandoned the restaurant, the colony of rats come together and actually start cooking five course meals. It's crazy even by Pixar standards, but it's so heartfelt and uplifting to see a dream being realized so fully is amazing. Besides, if rats can cook decent food, means there's hope for me, right?

I cannot stress enough how underrated this movie, and this moment, are. It starts with a rousing speech by Flik about how the grasshoppers have oppressed the ant colony, and how strong the ants really are in comparison. Good always is stronger than evil, even when the good seem weak. Hopper is exposed for who he really is, and what follows is an ant uprising that forces the grasshoppers into a retreat, ends with Hopper's death, and grants freedom for the ants. Flik's speech is very rousing and I feel like getting my life in order for a full hour after watching it. 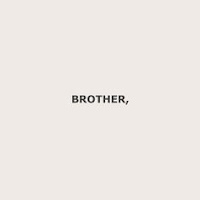 The newest addition to the Pixar film list is all about family. While taking place in a fantasy world of magic and elves, the main characters are a pair of brothers. Being an older sibling myself, this particular scene was very heartwarming. The moment features the younger brother, Ian, reflecting on the time he's spent with his older brother, Barley. He grew up without a father, but he had Barley to look after and raise him. The montage is so sweet and I highly recommend watching the movie again.

Toy Story 3 is probably one of the most perfect films made. I can't really find anything wrong with it at all, and one of the best things to come out of it was Spanish Buzz. It's a simple concept, yet so utterly hilarious that it never fails to make me smile. Not only does he speak Spanish, but he dances and acts like it, too. It may not be a singular moment, but it's hands down one of the best things about Pixar.

Not long after Lightning McQueen finds out that the salty old car in Radiator Springs is none other that the legendary racer the Hudson Hornet, he catches him racing on a dirt track. It reveals how good of a racer Doc really is, especially when it came to drifting around that tight turn. The moment is all about someone re- discovering their dream after giving up on it for years. The music that's paired with the scene only adds another layer of adrenaline to the scene, and when I saw this went it first came out, I was thrilled.

This moment actually has nothing to do with the titular character, sweet as he is, or any other robot, for that matter. I think a lot of people were thrown for a loop when humans showed up on the screen halfway through the movie, completely dependent on machines for their livelihood. They couldn't even stand or walk on their own. At least, not until they decide to take their lives into their own hands. The moment the captain of the Axiom stands on his own always has me cheering inside, just like the passengers who are watching it happen. 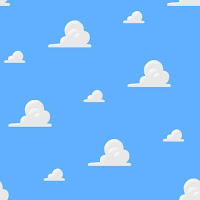 My all time favorite moment in Pixar was actually easy to pick. After is was firmly established that Buzz couldn't fly, we all collectively held our breath as both he and Woody plummeted towards the ground after bring free from the rocket. Call it flying, or falling with style, but somehow the two do end up flying, and for a good long distance. Couple that with Randy Newman's score of To Infinity and Beyond, and you have yourself scene that will inspire generations.

Do you agree with my picks? What are your favorite Pixar moments? I would love to know! Also, this month's House Special will be focused on Pixar characters, so make sure and comment if you want to see a specific one!