You have just crossed over into..... the Twilight Zone. Welcome everybody to the kickoff of the Twilight Zone Blogathon! I've been planning this for a while, and I am super excited to get into it! If you'll indulge me, I'll start off with some history about the show. The show first aired in 1959, when tensions of the Cold War were at their peak, World War II was over, and racial tension was thick. A bulk of it can be classified as science fiction and fantasy, with some thriller thrown in. It was controversial for its time, and it creator, Rod Serling, had to constantly fight just to keep it on the air. However, watching it now, the impact it has had on culture and modern entertainment is nothing short of staggering. Without further ado, I will give you my answers to the Tag I posted back in August, which you can find here, if you missed it. I will also issue a HUGE SPOILER warning for this post.

This is probably one of the hardest to answer in the whole list, as this show became widely known for its twist endings. Plus, there's the fact that everything gets spoiled via internet, since it's so old. However, this one somehow wasn't, so I was very shocked when it ended. Should I not have been rooting for the terrified old woman the whole time!? Here I was thinking there are little, terrifying aliens running around, when they are actually humans from Earth and the woman is part of a race of giant aliens. Put in the the fact that there's no talking until the end, some great acting, and you have one of the best episodes ever written.

A: The Night of the Meek

The Twilight Zone isn't all dark and gloomy. There are actually numerous happy endings to go around, and I had a hard time picking a favorite. But I went with this classic Christmas episode because it shows that Christmas is indeed a magical time, in this case literally. A washed up man, down on his luck on Christmas, finds a way to bring joy to others on the holiday, and eventually gets to ride off in a sleigh with an elf to his own happiness. Interestingly enough, this episode aired on December 23rd, two days before Christmas.

Q: Favorite Version of the Devil?

A: Miss Devlin, Of Late I Think of Cliffordville 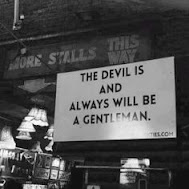 There is no shortage of devil portrayals in this show, willing to showcase all sides of him. Most of the time, it's a man who either plays the victim or doesn't bother to hide how evil he is. But sometimes, the devil comes as everything you're looking for; like a tall, beautiful woman who will give your hearts desire. You would never suspect that she's got a pair of horns under that hat and a truly chilling laugh that tells you she'll get what she wants. She twists and manipulates so well, that, even after multiple warnings, she gets what she wants in the end.

A: Hocus- Pocus and Frisby

Aliens are a staple of many Twilight Zone episodes, both malevolent and benevolent. They also tend to come with some strange designs and work- ups. My personal favorite are the aliens that end up really kidnapping Frisby in this episode. They manage to look both very human but also terrifying, and I truly got freaked out when one of the masks got broken and we saw the insect looking face beneath it. *Shudders*. Too bad no one believed Frisby, because I have a feeling those aliens would be back for more in that universe and I would not want to be there when they did.

A: The Obsolete Man

The future is often interpreted many different ways, from the wastelands of war or the glories of space travel. This episode brings along a different perspective, one that is actually far more real and terrifying than any other future depiction Twilight Zone has conjured up. In it, a man is put on trial before the state for being obsolete, only for reading books and believing in God. The entire thing is dark and foreboding, and all very real. Shout out to Burgess Meredith for his role in this episode.

A: Mr. Garrity and the Graves

How do you perform a long con in the American West? By claiming you can raise the dead, of course. Why I chose this Western episode is because it actually has a great twist ending. As it turns out, Mr. Garrity is actually good at what he does. Too good. He goes from town to town, pulling off successful cons and then leaving. However, in his wake he leaves chaos, as he actually can raise the dead, leaving whatever town he passed through to deal with the fallout of his unknown power.

There was actually no contest when I made this choice. This episode scared me to death, and hats off to Barbara Nichols, who played the main character, for her acting. The episode shows a nightmare sequence in a hospital, using heavy shadows. A morgue and creepy nurse is involved, and the nightmare turns out to be premonition, as it saves her life in the end. Still, the entire thing makes you tense and stressed, wanting to hide your eyes. We literally feel like the main character throughout, and we're definitely seeing it from her point of view.

"Room for one more, honey."

A: I Sing the Body Electric

While, in all honesty, this episode was less than stellar, the title actually carries all the weight. You could probably sit and think for a whole day what its supposed to mean, and probably won't reach a conclusion. It sounds very mysterious and carries and dark conatation. I guess I expected too much going into it when I first watched it because it had a killer title. Don't get me wrong, this episode was seven layers of creepy, but unfortunately they weren't played up.

A: Robert Redford, Nothing in the Dark

I had yet to see what a young Robert Redford looked like until I watched this episode. Here, he plays the gentle character of Death, assuring an old woman that it's nothing to be afraid of. Frankly, if Death was a person and looked like that, I wouldn't mind going away with him to die willingly. I loved this portrayal of death, showing it as something that is natural and doesn't necessarily happen with the suddenness of an explosion, giving the title all the more meaning.

This is probably the hardest question in the whole tag, as there are so many episodes, and it's hard to narrow down to just one favorite. However, I think this one is the perfect mix of creepy, heartwarming, and heartbreak. It follows the story of an elderly, bed- ridden woman who receives terrifying phone calls in the middle of the night, only to find out its her long dead lover calling her from beyond the grave. Her realization comes to late, however, since he now thinks she has abandoned him. I actually thought about this episode for days after watching it, between the brilliant story, the twist, and the overall creepy vibe coming from the other end of the phone in the middle of the night.

Want to participate in this week's Blogathon? You can find all the details here, as well as the format for the tag. I am super excited to see what you come up with!